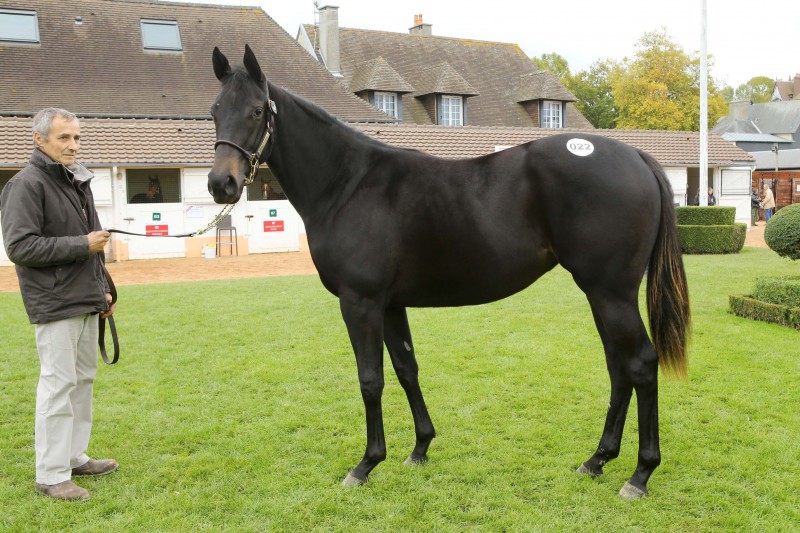 Wajnah, a two year old Redoute’s Choice filly out of Benzolina bred in partnership by the Haras de Saint Pair and Francois Rohaut made a winning debut at Bordeaux on September 27th. Trained by her co breeder and racing in the colours of Al Shaqab Racing Wajnah was always prominent and held on well in the straight for a 1/2 victory in a 1600 metre maiden for unraced fillies.

Wajnah (photo below at the October sale 2015) was sold by the Haras de Saint Pair at the 2015 Arqana October sale for 260.000 euros to Mandore Internationa Agency.

At the same sale Saint Pair sold Graphite a Shamardal colt out of Fairly Grey to Anthony Stround Bloodstock for 250.000 euros. Graphite made his debut at Maisons Laffitte on September 26 in the colours of Godolphin for trainer Andre Fabre. After missing the break he came from behind to finish fourth beaten about a length in total.

Another Saint Pair bred two year old to make an impressive debut was the Clodovil filly Cloistered who finished second behind an experienced filly on her fist start at Naas on September 21st. Cloistered is out of Namibia and was sold by Saint Pair at the 2015 Goffs Orby sale for 65.000 euros. Cloistered runs in the colours of Mrs Patrick Cooper and is trained by Mrs John Harrington.