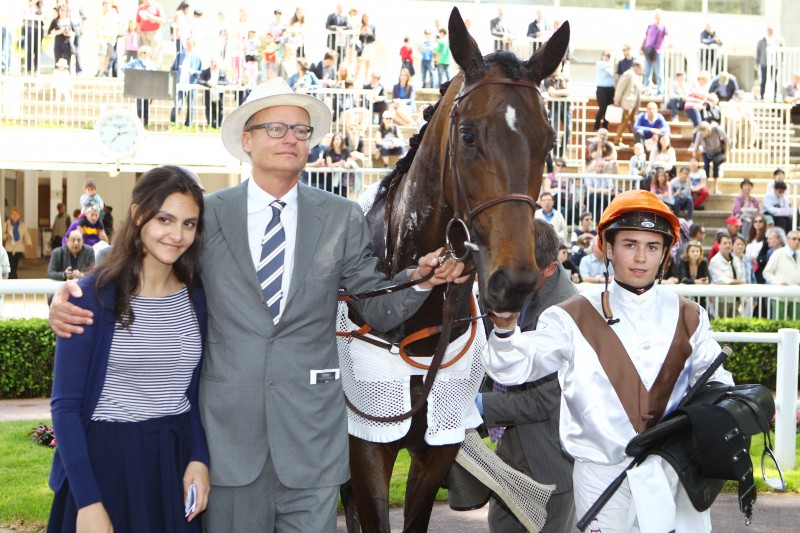 The Haras de Saint Pair’s Ampere retained his unbeaten record with a length’s victory in the Group 2 Prix Hocquart at Longchamp on May 10. The son of Galileo challenged for the lead at the top of the straight when still travelling easily. Cape Clear Island, a son of Fastnet Rock trained by Aidan O’Brien, responded and together the pair pulled away from the remainder of the field before Ampere asserted and drew away for a length victory in the final 100 metres. Ampere showed plenty of speed, he covered the last 1000 metres of the 2200 metre race in only 59.24 seconds, and has the potential to be a top middle distance performer.

His trainer Andre Fabre suggested after the race that Ampere is likely to run in the Group 1 Grand Prix de Paris on July 14, and the son of Amorama will be entered in the Prix de l’Arc de Triomphe on May 13.

Ampere is the fifth foal and fourth winner of the Grade 1 winner Amorama. Amorama has a yearling colt by Lawman and will be rested in 2015.

Saint Pair has sold three daughters of Amorama, Amoa who is in France, A Moi owned by Gestut Hachtsee in Germany and Amo Ami Ama, a daughter of Monsun who was sold to Belmont Bloodstock for 100.000 euros at the 2013 Arqana December sale and is in Australia.