Saint Pair will offer three fillies at the Arqana December sale, as well as Jukebox Dancer who is owned in partnership and is being offered by her trainer Nicolas Clement. Lot 217 is the three year old Lope de Vega filly Via Liguria. Via Liguria has run four times for trainer Jean Claude Rouget finishing third and second on her first two starts before being unlucky in running at Clairefontaine and falling coming out of the stalls at Craon on her latest start. She has an official rating of 83 and was beaten only narrowly by a stakes performing filly on her second start over 1350 metres. She is the first foal of the Monsun mare Via Manzoni. Via Manzoni’s second foal made 525.000gns as a yearling and is in training with Henri Francois Devin, her yearling Siyouni colt is with Jean Claude Rouget and she has a filly foal by Shamardal.

Lot 240 is Amourdargent, a two year old Kendargent filly,  the first foal of the Montjeu mare Amorine. Amourdargent has made four starts for Jean Claude Rouget and has finished  a close second on her two latest starts over 1800. Her dam has a filly foal by US Navy Flag and is in foal to Siyouni. Lot 359 is Perle d’Auge an unraced Le Havre filly from the Pearly Shells family. Her dam the Oasis Dream mare Pearly Steph was a stakes winner at 1600 and her yearling colt by Frankel was bought by Godolphin for 700.000gs at October 1. Pearly Steph is a half sister to 2020 Group 3 winner Lucky Lycra as well as to Pearls Galore, a winner and Group placed in Ireland this year for Saint Pair and trainer Paddy Twomey.

Lot 219 the three year old Jukebox Dancer  is owned in partnership with Robert G Schaedle. Jukebox Dancer has run eight times at two and three for a win and four places and earnings of 35.041€. She has proved herself to be a very useful performer on good ground or the all weather looking unlucky when runner up in handicaps at ParisLongchamp and Saint Cloud before winning easily by 2 lengths over 1500 metres on the all weather in Deauville on her latest start. 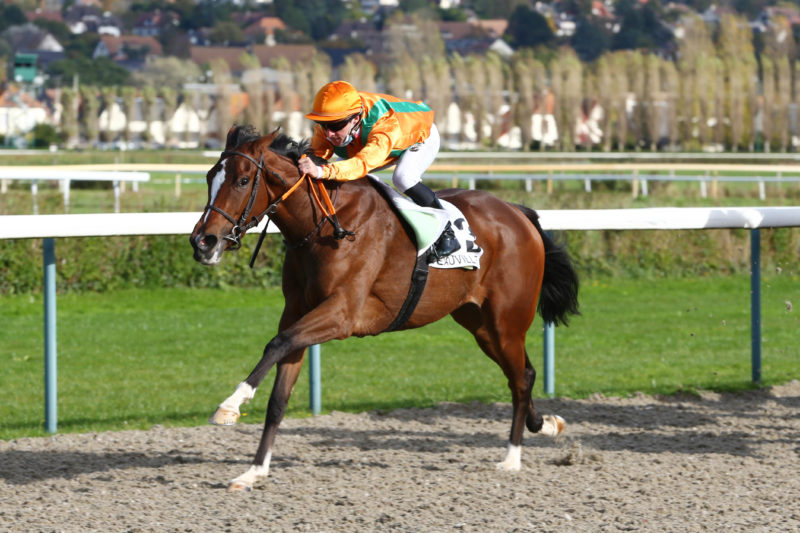