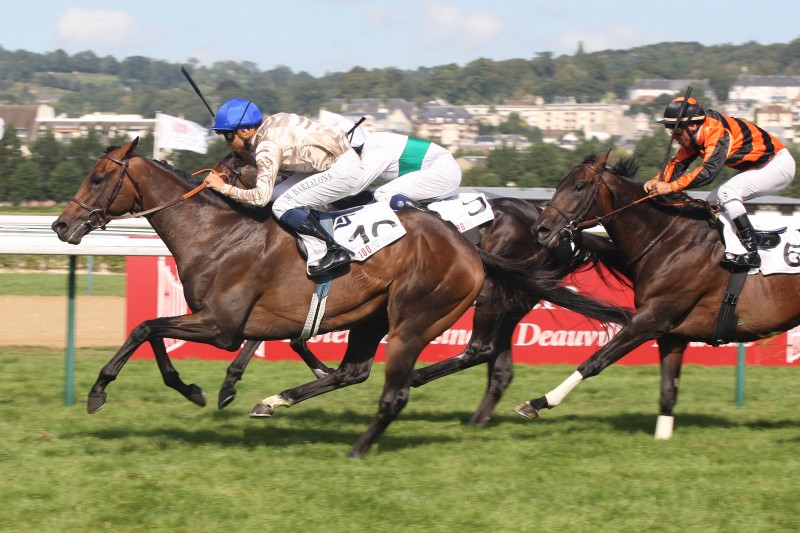 MASTERSTROKE became the sixth Group winning three year old by Monsun in 2012 when coming with a late run to take the Gr 2 Grand Prix de Deauville on August 26. Monsun has only 48 three year olds in total and they already include six Group winners and two further stakes winners. At the end of August 13  (27% ) of Monsun’s three year olds had already achieved a rating of 95 or higher.

The Haras de Saint Pair’s three year old filly Pearls Or Passion is due to run in the Group 3 Baden Racing Stuten Preis on Sunday September 1 in an attempt to become her sire’s seventh Group winning three year old of 2012. The daughter of the champion Pearly Shells was only narrowly beaten by the subsequent stakes winner Only A Pleasure on her last start at Vichy in July and will be suited by the 2200 metre trip and the likely soft ground.

There are six Monsun yearlings due to be offered at the BBAG yearling sale on Friday August 31 including Lot 47, a colt out of Namibia offered by Stauffenberg Bloodstock. Namibia was unbeaten in three career starts winning a Listed race over 1600 metres at three on her final outing. Her dam Narooma was also unbeaten winning all three of her career starts at two including the Gr 3 Preis der Winterkonigin to become Germany’s champion two year old filly. Namibia’s first foal is a two year old Monsun filly Nagaya currently in training with Guy Henrot.

« TROIS LUNES IS BACK
DANSILI PROVES HIS WORTH »